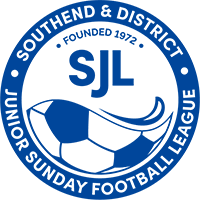 1..    The Competitions shall be conducted in Age groups U11/U12/U13/U14/U15/U16 & U17/18 in accordance with the Rules , Regulations and Laws of the F.A. and shall be open to every member which is a member of the Southend and District Junior Sunday Football League.  The competition shall be affiliated to the Essex County Football Association and may be played in a knock out basis or a qualifying group basis with a knock out format at its conclusion

2..   Entrance to the competitions shall only be open to SDJSFL member clubs

5     Semi final and finals  players must have played a minimum of  four matches for the same team to qualify to play . These four matches must be SDJSFL matches. External competitions do not count

8     The league reserve the right to switch grounds should the first named team(home) ground not be available.

9    The draw for the competitions shall be made by the automated FULL TIME website  and posted on that site as the competition progresses.   The first drawn team shall be considered the Home team and shall be responsible providing the match balls and the venue.  In the Finals the League will always provide the venue , match balls and setting the kick off time.

10    Referees and assistant referees may be appointed to the Semi Finals/Finals  by the League . In the semi finals fees are to be split between the competing teams , In the final the referee and assistant may receive a mementoes and expenses in lieu of fees.

11     Pitch fees match officials fees shall be shared equally between the two teams in all rounds but it is the responsibility of the home team to pay the match officials .  Any claim for pitch fees should be supported with an providers invoice.

12      Any team failing to keep its engagement through being unable to field a team shall by default have the match awarded to the opposition (both group and knock out).  If a match is cancelled for any other reason other than players being unavailable the defaulting club shall be charged under League rule 6D and the management shall decide the outcome in accordance with the League Rules

13     For competitions with group qualifying section the following shall apply .  All matches should be completed by the group completion date as notified  at the start of the competition . Any matches not completed and not under a charge shall be treated as unplayed fixtures.

A  Play off  match (if the League determine  time allows)

B   Drawing of Lots / toss of coin

Agreed and accepted by members at AGM August 2020